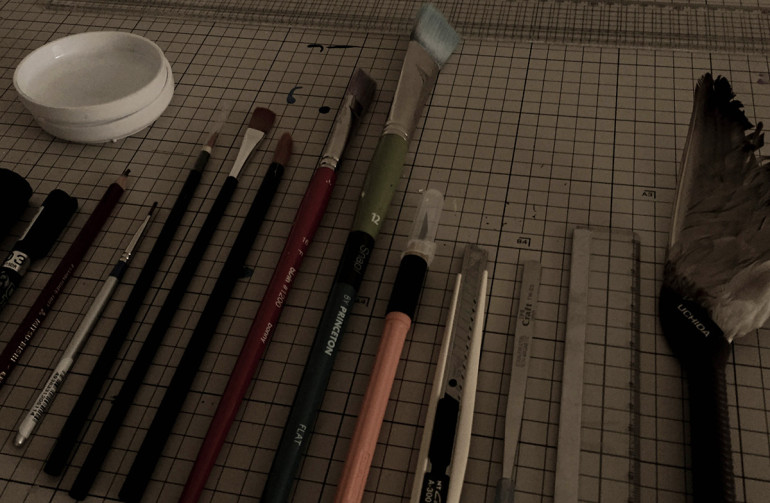 Room 427 is the virtual creative studio founded in 2010 by Yosuke Komuro. We create artworks with any devices and materials based on our background and our ideas.

Born in Tokyo, 1978, Yosuke started to draw since his early childhood. Influenced by the work of Osamu Tezuka and Akira Toriyama, Yosuke decided to become a manga artist when he was seven (7). At the age 14, his own manga work was well received by a publisher, which made him desire to work with an editor from the publisher, and to professionally publish his work. However, his art teacher gave Yosuke his work book, which inspired him tremendously, and made him interested in drawing materials beyond manga. He started drawing acrylic paintings. His became interested in art in various fields including paintings and designs, which made him decide to learn industrial design, art and graphic design. After studying in the US, he started working for an advertisement production agency as a graphic designer, and then decided to go freelance in 2010. Meanwhile, Yosuke was always a type of child who would prefer to spend his time alone, enjoying sceneries and lights in nature to stay within a crowd. Presently, Yosuke’s areas of interests expanded into various fields, including the universe in cosmic space, the inception of a world itself, physics, natural science, history, and religion. In studying those subjects himself, Yosuke began to acquire his own interpretations on these topics, and developed his desires to express something substantive in the society, in which he was naturally led to use his drawing and creativity as a tool for his expressions.

Having realized that, in pursuing the essence of matter, a truth takes a form of very simple structure, he continues to produce his work by refining various elements to the ultimate minimum, and pursue the simplicity and clarity in his style of expression. Therefore, the characteristics of his work are simple yet while encompassing elements that are concrete and logical. He has a sensitive vision and hearing, dislikes the complexity and noisiness, and prefers a coherent cleanliness and silence, which contribute to his minimalistic work.

Overall, his technique and sensibility were born by growing up in Tokyo, with the influence of Western culture and familiarity with various creations including manga. Also his life in the US and journeys throughout various countries added another layer to his work. However, he is based in Japan, which made him realized that the degree of influence from Eastern culture including the Buddhism that underlies deeply and affinity to sensitivity are inevitable. This hybridization of the East and West is present in his work without doubt.